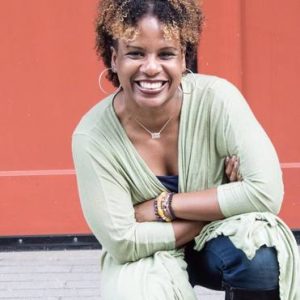 DARA COOPER is a national organizer with the National Black Food and Justice Alliance, an alliance of black-led organizations working towards national Black food and land justice. She is also an organizer with the HEAL (Health Environment Agriculture and Labor) Food Alliance and completed a southern tour interviewing Black farmers, co-ops, and food hubs throughout the south with the Center for Social Inclusion. Dara is the former director of the W.K. Kellogg-funded NYC Food and Fitness Partnership in Brooklyn, NY, where she worked on creating and strengthening Black farmers markets, developing a community based local food hub, and creating a farm to headstart program in Brooklyn in partnership with Corbin Hill Food Project, a local food hub. Prior to this work, Dara led the launch and expansion of Fresh Moves (Chicago), an award-winning mobile produce market with community health programming, which quickly became a nationally recognized model for healthy food distribution and community-based self-determination and empowerment. A former Uganda Bold Food Fellow (exchange program between professionals in the U.S. and East Africa), Kalamazoo Arcus Center for Social Justice Leadership Food Justice Fellow, National Alliance Against Racist Political Repression Human Rights Awardee, and a member of Black Farmers Urban Gardeners, and Malcolm X Grassroots Movement, she believes in the power of people organizing and investing in self-determining, sustainable communities worldwide. Dara is based in Philadelphia, PA.

Dara was recently awarded the James Beard Foundation Leadership Award for dedicating her life to racial equity and justice in the food system and increasing capacity and visibility of Black-led narratives and work. Read more here.

HEAL is a multi-sector, multi-racial coalition building collective power to transform our food and farm systems. We are led by our member-organizations, and strive to amplify the experience and expertise of frontline communities who are most burdened by the disparities of our current systems. Together, we are developing solutions to drive change. Visit HEAL Food Alliance website.

Growing Power uses converted city and CTA buses as mobile farmers’ markets.‘The farmers’ market on wheels’ works toward closing the ‘food access’ gap. Customers board the bus and fill their bags with delicious local produce: fruit and vegetables, as well as Growing Power products, and grocery items.  Produce is priced to be affordable for all and fair return for the farmers. We offer the “Double Value” program that provides a 50% reduction in price for SNAP customers,  as well as for Seniors and WIC customers who are using their ‘Farmers’ Market Nutrition Coupons’.  Coming soon we’ll be offering prepared salads, sandwiches and smoothies onboard.   Visit Fresh Moves Mobile Market website.