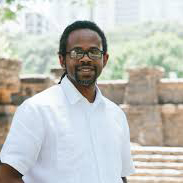 Born and raised in Atlanta Georgia, Terence has been an advocate for equity for twenty years. He began this work with the Service Employees International Union (SEIU) where he brought together African American, Latino, and Asian workers to improve their lives in Atlanta, Los Angeles, and San Francisco. Terence led union campaigns in the public and private sectors and later was appointed to be the State-wide Union Representative for SEIU in Georgia.

Terence increased the scope of his organizing work when he became one of the founding members and first staff person of a coalition of labor unions, student groups, community groups and faith organizations called Atlanta Jobs with Justice (AJwJ). He also co-founded community organizations to meet the needs of evolving human rights campaigns in Atlanta’s public sector. One such organization called the Atlanta Public Sector Alliance (APSA) won significant victories in the struggle against neoliberal attacks on public life.

Expanding his movement-building work from City-wide to Southern Region-wide, Terence became the Southeastern Regional Organizer for the Black Alliance for Just Immigration (BAJI). Creating committees and coalitions with Black Immigrants and Black Americans throughout the South, Terence facilitated a process whereby everyday working people were able to educate themselves and address pivotal issues concerning immigrant rights and mass incarceration from a Black perspective. This experience refined his strategy for economic justice even further.  His new theory of change came to not only include workplace-based/community-based fights, but also a struggle to democratize the economy itself – through Cooperatives Development.

Terence next developed human rights and cooperative development exploratory committees. One of which led to the formation of an organization called the Organization for Human Rights and Democracy (OHRD), where he served as a Founder and the Director of Organizing overseeing campaigns against school takeover and privatization. The other project became Cooperative Atlanta – a committee assembled of diverse Atlantans to study the Cooperative Development movement and strategize on how it might be implemented at the grassroots level. From the collective research, study and dialogues of the group, Terence and the others began to grasp the real potential that Cooperatives had to offer. This work brought Terence and his colleagues into closer contact with the rich history and practical experiences of organizations like the Federation of Southern Cooperatives.

The outstanding and socially transformative role that the Federation of Southern Cooperatives has played in struggling for Cooperative Economic Development, Land Retention and Advocacy inspired Terence to continue his commitment to fight for justice by joining the ranks of the Federation. Currently, Terence serves as the Director of Cooperative Development & Strategic Initiatives, where he supports the cooperative economic development of newly emerging cooperatives, while organizing with members to strengthen existing cooperatives.  He is fortunate to work with staff from across the US South to advance the goals and objectives of Federation members and the Cooperative movement.