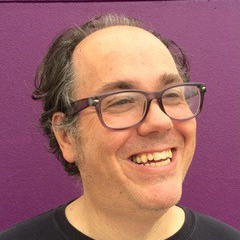 Dan Gillotte has been working in food co-ops since 1993 and is currently the General Manager of Wheatsville Food Co-op, the only retail grocery cooperative in Texas. He is a board member and former board president of the Cooperative Grocers Network (CGN) and sits on the board of National Cooperative Grocers (NCG). Locally, he is a board member of the Austin Independent Business Alliance (AIBA) which was founded in 2002 by a handful of Austin businesses, including Wheatsville, as a way to help independent businesses compete successfully against corporate chains. Dan is also a charter member-owner of Black Star Co-op.

As the co-op’s Chief Executive Grocer (CEG), Dan has successfully led the co-op through complex renovation and expansion projects including market studies, bank financing, capital fundraising, lease negotiation, permitting, store design, and a brand re-launch. Within the past two years Dan has also implemented programs and structure to address price image, livable wages & benefits, and increased competition. Through careful cultivation training and preparation, Dan has led his staff to higher and higher standards of business excellence, putting Wheatsville on the top tier of grocery co-ops nationwide.

Dan brought Open Book Management to Wheatsville about 7 years ago and has helped countless food co-ops get into the Great Game of Business!