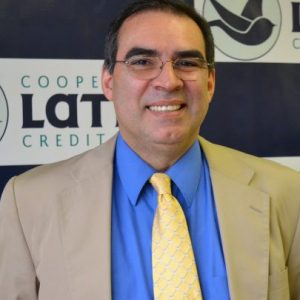 John Herrera is Vice-President of Latino/Hispanic Affairs for Self-Help, a statewide CDFI, where he has helped grow lending to Latinos from under 5% in 1999 to more than 30% in 2004. One of LCCU’s co-founders, he is responsible for supporting LCCU’s external relations and overall strategic planning. He is also the founder of El Pueblo, Inc., a statewide Latino policy organization and a founding board member of El Centro Latino, a community-based organization. He was an Alderman in Carrboro, N.C. Herrera is a former Eisenhower Fellow and was honored by the White House as a Champion of Change for his accomplishments as an Immigrant Entrepreneur and Innovator. He holds an M.S. from N.C. State University in Parks, Recreation and Forest Management, with a concentration in Community Development and a B.S. from the University of Delaware.