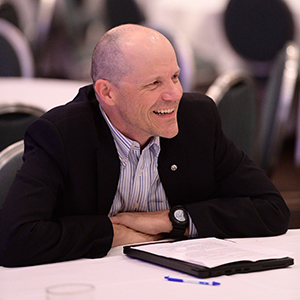 Doug O’Brien is the President & CEO of NCBA CLUSA, where he works with the cooperative community, both domestically and internationally, to deepen its impact on individuals and communities. NCBA is the primary voice for cooperatives in the United States for using the cooperative business model to empower people in their businesses and communities. Doug has been with NCBA since 2016, where he has served as the Executive Vice President of Programs before becoming president and CEO in January 2018.

Before coming to NCBA CLUSA, Doug led the work of the White House Rural Council and served in top positions at the U.S. Department of Agriculture Rural Development, a community economic development agency with over 40 programs and 5000 employees that annually finances more than 30 billion dollars. Doug has also worked in the U.S. Senate, U.S. House and for two Governors. O’Brien’s experience in academia includes teaching, researching and writing at the University of Arkansas Agricultural and Food Masters in Law Program and Drake University Law School.

O’Brien was raised on a diversified farm in Dubuque County, Iowa, and holds degrees from Loras College (Dubuque, Iowa), the University of Iowa Law School, and the University of Arkansas Masters in Agricultural and Food Law Program. O’Brien lives in Takoma Park, Maryland, with his wife, Alisa, who works in policy and communications consulting. He enjoys biking, travel, spending time with his three children, and his memberships in a number of consumer co-ops.